What is the single player campaign?

The single player campaign pitches you against 75 Goblin villages, each more difficult than the previous one. This campaign is available to all players right from the start of the game.
In the village view, just tap the 'Attack' button to find the Single Player campaign on the right side of the screen: 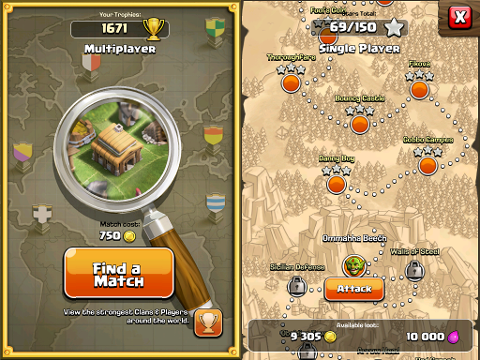 Every successful single player battle rewards you with gold and elixir, but the loot is finite for each level. The rewards grow as you progress in the campaign.  You only need a 1-star victory in a level to progress to the next.
Single Player attacks have no time restriction, and they do not affect your shield.  Also, a player will never lose or gain any trophies in the single player campaign. This offers a great way of learning the kind of damage a defense makes, while at the same time learning how to use troops more effectively.
Achievements
In order to unlock the achievement "Get Those Goblins!", you need to score 3 stars on all of the first 50 levels. To unlock the achievement "Get those other Goblins!" you have to score 3 stars on levels 51 to 75. To unlock the achievement "Dragon Slayer", it is enough to destroy the Dragon.
Now go and get those Goblins!
Last Updated: 189d • Permalink
ICP 2020026027-1