How do I prepare for a Clan War?

Preparation is so important to Clan Wars that we’ve you will have 23 hours before the war for it. Preparation Day starts as soon as a worthy opponent has been found through the matchmaking system.
First make sure that your War Base is optimized for defense. Defense is important because you want to deny the enemy of Stars and a high destruction percentage from attacking your base. For example, leaving the Town Hall in a position where it is easy to destroy will give the opponent a one-star victory. Ask Clan mates and search online for tried & tested War Base layouts.
You can edit your War Base also before a Clan War begins, but you have to do it latest during the Preparation Day to have the changes count in the upcoming War.
Your War Base will contain the same buildings as your regular village. However, every time you add a new building to your village, you have to go to your War Base's inventory to “deploy" that building in your War Base. The game will not choose a random spot in your War Base for any new constructions — you get to decide where everything goes. If you leave a new building in your inventory, it won’t appear in your War Base during Battle Day. 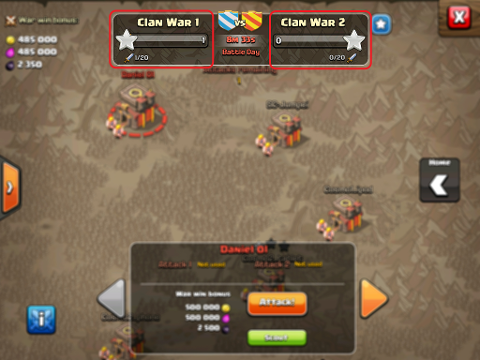 To request troops that will defend in enemy War Attacks on your village, you need to tap on your village in the War Map, and press the "Request" button. You can request troops to attack with in the troop training menu. Defending troops will survive through attacks to your War Base, where as troops you attack with are lost once you deploy them.
Another important step is troop donation. The Clan Castle in your War Base is different from the Clan Castle in your village, and must be filled separately.  The troops donated to a War Base will be used to defend it against all attacks during the War, so be sure to request troops that you feel will work well with defending your layout.
You cannot use troops donated to your War Base for your own attacks, these you request from Clan mates in the Troop training screen. 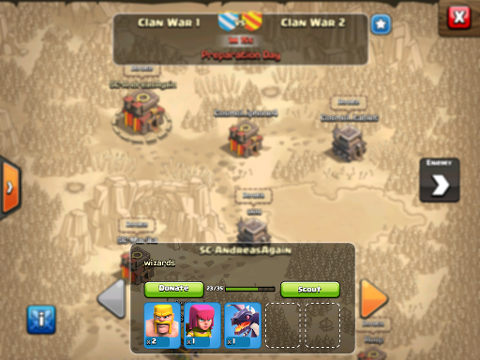 Finally, you will see the enemy's actual War Layouts once Battle Day starts, and this is your opportunity to scout the enemy villages to zero in on the perfect targets. The game will give you a suggested target, but you can attack other targets too. Just be sure to coordinate with your Clan who will attack which opponent. You only have two attacks so make them count!
Last Updated: 189d • Permalink
ICP 2020026027-1