Attacks on Battle Days reward Elixir, Dark Elixir, Gold and Clan XP similarly to regular Clan Wars. For each battle that you win, you earn the chance to receive war win bonus resources. The war win bonus is delivered to the Treasury at the end of each War. To get the war win bonus, your clan has to win the Clan War of that day.
League Medal reward rules
Players win League Medals based on which league the Clan is playing in, and what is the Clan's placement within the Group at the end of the Season. Winning the Group and ending in top position will yield the most League Medals, and each lower position will yield a few League Medals less: 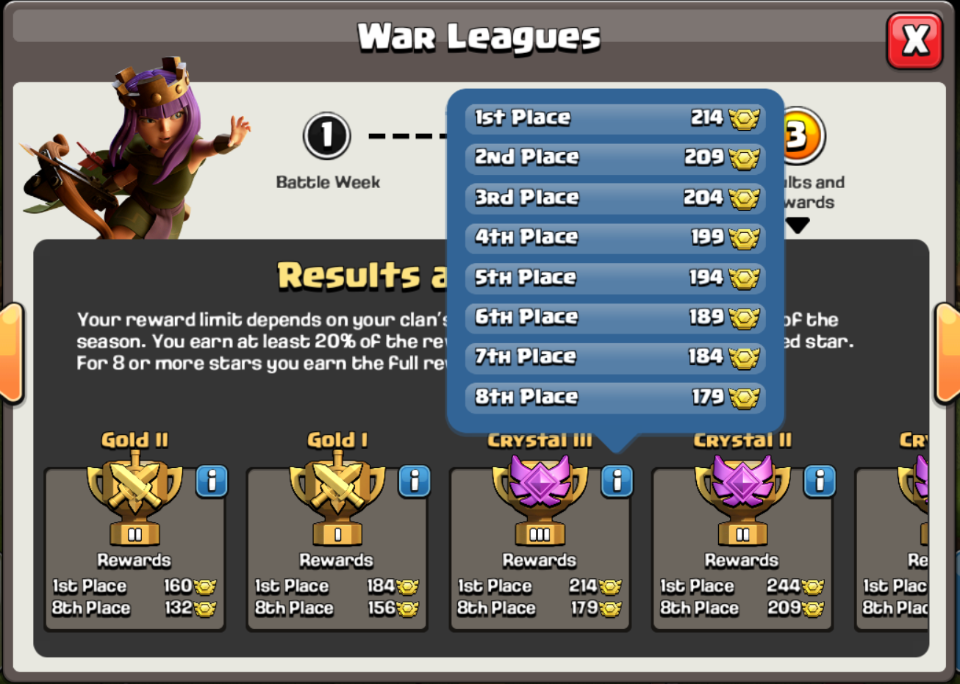 For a player to get the full reward for his Clan's placement, he must gain at least 8 War Stars from his attacks during the Season. Without scoring any War Stars the player can only get 20% of the possible League Medal rewards. Players who are in the Roster but who are not placed on the War Map on any of the Battle Days also get 20% of the possible League Medals.
Bonuses
Clan Leaders can also reward Clan members with bonus League Medals. Each war that the Clan wins increases the amount of players eligible for the Bonuses by one. 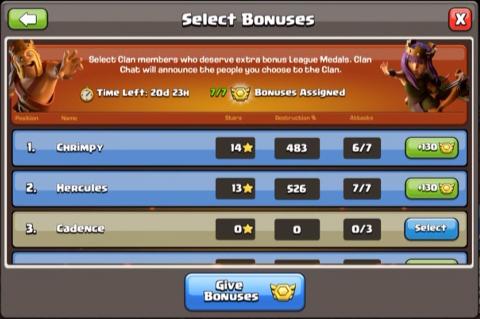 The Bonuses have to be distributed within 21 days of the Clan's War Week ending. The size of a bonus as well as how many people it can be given to depends on the Clan's League during War Week. For every War that the Clan Wins, an additional person can be given bonus League Medals.
What if a player is kicked out or leaves the Clan?
If a player is enrolled into the Roster, but then leaves or is kicked out of the Clan, he is still eligible for:
Where to shop with Medals?
The precious League Medals can be put to good use in the Shop in the "League Shop" tab.
Last Updated: 189d • Permalink
ICP 2020026027-1